You are here: Home / Blog / An Insiders Guide to Zen on your Bike

THE INSIDER’S GUIDE TO ZEN ON YOUR BIKE

It’s 5:30 a.m., still dark outside, and frigid. A block from my apartment, New York’s die-hard cyclists loop the Central Park Reservoir (neither rain nor snow nor sleet …). I’m not one of them. I’m the consummate insider. When it’s cold or wet or dark (or some combination), I’ll take a meditative ride indoors any day.

This might be a little abstract for the average roadie or triathlete, but if you’re reading Victor’s blog, then you’re probably not so average. And you’re probably wondering why you’d meditate on a bike when you could hammer out some intervals, or just spin and watch TV.

As I’ll show you, the meditation I mean isn’t the usual kind. The process is different, and the outcome is more tangible. It lets you enter a whole new realm on the bike that impacts life off the bike. And it smashes boredom and makes time fly, which we all want.

Indoor Zen rides just came to me, without any trying. It’s become my own form of something I later learned about: zazen – the centuries-old Zen practice of seated meditation intended to bring the practitioner to nothingness and restore his true nature. As a non-expert, I think of zazen as the Buddhist version of hitting the reset button.

Bike zazen is its own phenomenon. You get on your trainer with an iPod filled with music you love. A dim or dark room works best. You close your eyes and start spinning your legs, and pretty soon – boom, you’re on your way to that true nature thing.

What exactly is that? It’s experiential. You’ll know it when you feel it. Here are some hallmarks: 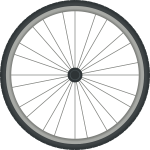 On a Zen ride, true nature builds with every pedal stroke. Picture it: head down, eyes closed, cadence synched to Led Zeppelin, cascading sweat, unparalleled lucidness. Ideas and solutions start flowing, including those that alluded you before – all with such clarity that they hold once you’re off the bike (which is good, because a lot of it is hugely useful and worth pursuing).

Well, for example, there have been many ideas for things I’ve made real, like my blog and the model it’s based on, much of which came to me in a succession of Zen rides. And there was the bike tour I did in France. It was on a Zen ride that I decided to go, which precipitated a rigorous training schedule and a high altitude cycling camp.

See what I mean by tangible? Want to make things happen in your life? Then maybe you should try this.

How does it work?

A confluence of forces is at work, so it seems – namely motion, music, and the mental blocking of external stimuli. Looking to neuroscience and psychology, it all makes sense:

Mental blocking. Riding indoors, eyes closed, frees up mental space for thought that might not otherwise occur. (Our nervous systems, after all, can only process about 110 bits of information per second. Listening to someone talk takes up about 60 bits, so imagine how much is taken up by processing what’s around us outdoors.)

Music. Music has the power organize us. It’s also emotionally transforming and mood enhancing. And it can foster a sense of trust and surrender (especially the music of the last 40 years). It sets in motion what one neuroscientist calls an “exquisite orchestration of brain regions” and a “choreography of neurochemical release” that blends logic with emotion. Moving our bodies to music (particularly good rock dance music with a beat) isn’t terribly bit-consuming. To the contrary, it limits our field of stimuli and induces the mental state known as flow

Einstein experiencing Zen on the bike

Zen on the bike is it’s own phenomenon, with its own purpose. It’s not intended to replace anything else you do. How cool is it that there’s an actual biological basis for why it happens? My suggestion: throw all care to the wind on a cold winter morning and do it, without trying to make anything happen, and without trying to gain something. If nothing happens, so be it. Do it again from time to time. You just might find your true nature, and who knows where that could lead.

Are you an outdoor purist? Do you ever ride indoors? What’s your usual set up? How do you tackle boredom? What about Zen on the bike? Crazy sounding? Might you give it a try? How might you work it into your training schedule?

Susan Alexander is the creator of app4Mind, a memorable model you store in your mind and use to enable any change you choose to make in your life. Her website is app4Mind.com.  You can follow her on Twitter at @app4Mind.

This site uses Akismet to reduce spam. Learn how your comment data is processed.